Deeply rooted in ancient Chinese beliefs, the Yin yang philosophy represents the duality of all things in the universe. Balance and harmony between yin and yang is an essential principle of feng shui, Taoism, certain forms of martial arts and other Eastern philosophies.

The Roots of Yin and Yang in Ancient China

The yin yang symbol is recognized worldwide. It started thousands of years ago in ancient China. The earliest yin and yang symbols were found on oracle bones dating back to the 14th century BC. Oracle bones are the skeletal remains of animals that the early Chinese used as a method of divination. The symbols used in these inscriptions represent the duality of basic natural phenomena such as day and night. During the following centuries, the philosophy of yin and yang represented the beliefs of the Chinese in their understanding of the functioning of the universe. It represents the opposite, but complementary, double polarity of all existence. The universe is made up of energy, or chiand all energy contains a balance of yin and yang.

Understand the philosophy of Yin and Yang

During the years 207 BC. in AD 9, the Han dynasty attempted to unify all the schools of thought that existed in China. We wanted a standardized culture and philosophy and we tried to merge all the schools into one system. Han dynasty philosophers focused on the I Ching, also known as the Book of Changes.

Development of the Tao

Using the I Ching, the philosophers developed the Tao, which is the principle of the functioning of the universe. Their new theory has been made into an appendix to the I Ching, and it explains the origins of yin yang, also known as the Five Agent School of Chinese Thought. It also included an explanation of how the universe and everything in it metaphysically works.

The Yin Yang school of thought is based on a single principle that the universe is ruled by the Great Ultimate, or Tao. The philosophy of the Tao is that everything is divided into two opposite principles but dependent on each other in their existence and actions, yin and yang.

Represented by the outer circle, the symbol is everything in the universe, or the whole of a single aspect of existence. The areas of white and black shapes within the circle represent yin and yang. These shapes symbolize the two energies and their interaction with each other that makes everything happen in the universe. Their flowing curved shapes symbolize the constant change taking place in the universe between yin and yang, one flowing into the other in an endless cycle of balance and harmony.

See also  What are the qualities and faults of Aquarius?

Yin and Yang are present in everything that exists

According to the yin yang philosophy, everyone is present in everything that exists. The yin yang sign represents this symbolically. The large dark area has a small white circle and the white area has a small dark circle. This illustrates that not everything, as in life, is completely white or black, and neither can exist alone. They must exist together, and each energy contains elements of its opposite energy. The yin yang symbol conveys the feeling of the strong interplay of the two opposing energies showing that there is a continuous movement and exchange of energy between yin and yang just as there is a constant exchange of life energies. Yin, the dark area of ​​the yin yang symbol, is representative of the feminine aspect. Yang, the opposite or white side of the symbol represents the masculine aspect.

It is important to note that Yin and Yang do not refer specifically to any concrete object or phenomenon, they are used as tools to observe and analyze things and events to indicate an inherent tendency or quality. This tendency or quality is also relative and exists only in comparison with something else. For example, if we take the climate in France and compare it with the climate in the tropics, then we can say that in general, the French climate is colder, and therefore Yin in comparison with the climate of the tropics which is warmer and therefore more Yang. However, if we compare the climate of France to that of the North Pole, then the French climate is that of the Yang by comparison. The Chinese philosophy of Yin-Yang stresses the underlying unity of opposites, their interdependence and the transformation of one into the other.

The relationship between opposites

There is always some sort of relationship between opposites, which leads to the crucial difference between Chinese and Western philosophy. In the West, opposites are seen as separate, static and always exclusive. It has shaped our worldview and continues to dominate scientific thought. On the other hand, the Chinese philosophy of Yin-Yang emphasizes the underlying unity of opposites, their interdependence and the transformation of one into the other. It provides a vantage point from which the complementary nature of opposite pairs can be observed and used in practice.

These relationships have five essential aspects:

1. Yin and Yang oppose each other
Day and night have different effects on living beings, that is, most creatures sleep at night and are active during the day. Moreover, the qualities of day and night are opposite in nature (day: bright, warmer; night: darkness, colder).

4. Yang and Yang transform
During the 24-hour diurnal cycle, day turns into night and night turns into day.

5. Yin and Yang are infinitely divisible
As stated above, day (Yang) has morning (Yang) and afternoon (Yin); while night (Yin) has the period before midnight (Yin) and the period after midnight (Yang). 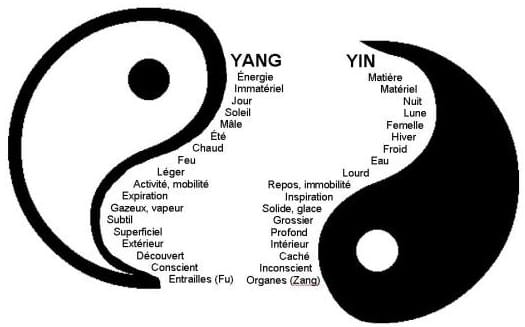 Based on the yin yang philosophy, everything in the universe is cyclical and constant. This means that an opposing force dominates for a while, then the opposing force becomes the dominant force. It also implies that in every state are the seeds of their opposing force, for example in health are the seeds of disease. Everything contains the principles of its opposite, in philosophical terms this is called presence in absence. Here are examples of the yin yang philosophy as seen throughout the universe.

The yin yang philosophy explains the duality found in everything in the universe and the interactions of opposing energies. It is present everywhere, and each component is neither good nor bad, it is just. One cannot exist without the other.

One of the main theoretical foundations of traditional Chinese medicine is the twin concept of Yin and Yang. Ancient Chinese philosophers used « Yin » and « Yang » to explain the changes that occur in nature. All things and phenomena in the universe contain two opposite aspects which are both interdependent and in conflict. These opposing principles are complementary to each other, but can also be opposed to each other.

Thus, the Yin-Yang is the path of heaven and earth, the guiding alignment of all matters, the parentage of all change, the origin of birth and death. The Chinese observed these principles in the natural events around them: day and night, light and darkness, growth and decay, activity and rest, summer and winter, male and female, hot and cold, sky and earth, sun and moon, etc. . .

They noticed two important characteristics of the relationships between opposites:

There is a kind of correlation between the individual components of different pairs of opposites. In other words, there is an essential quality which is common to a partner in each pair. This quality has been referred to as Yin or Yang. During the day it is bright and warm, the sun is out and people are active. These particular components – day, light, heat, activity and sun – all share an essential quality. This quality is called Yang. The concepts closest to Western thought are: « active », « positive » and « expansive ». On the other hand, there is night, darkness, cold, rest, and the moon, all of which share an essential quality that is opposite in nature. This quality is called Yin, which approximates a combination of the concepts of ‘latent’, ‘reactive’, and ‘contracted’.

A component in a pair of opposites has certain distinctive relationships to the other component. Day turns into night and night into day; the longer the day, the shorter the night and vice versa; summer passes into winter and winter into summer; activity is followed by rest, rest sustains activity; dormancy is followed by growth which is followed by decomposition. In all areas of life, these relationships describe the natural laws behind the continuous change, orderly development, rise and fall that can be observed in nature and in human affairs.

Yin and Yang in other elements of life

Yin Yang (chi energy) is the driving force of feng shui philosophy. Every aspect of feng shui focuses on maintaining and restoring yin yang balance in the home and environment. If the chi energy is out of balance in a home or work environment, the occupants may suffer illness, financial loss, work obstacles, and relationship problems. Feng shui principles address each of these areas and more through the proper application of remedies designed to restore the harmonious balance between yin and yang energies.

Yin and yang run through every aspect of your life, from your workspaces to your home, to your relationships. In most cases, nothing remains entirely yin or entirely yang for eternity.